This is the original soundtrack. 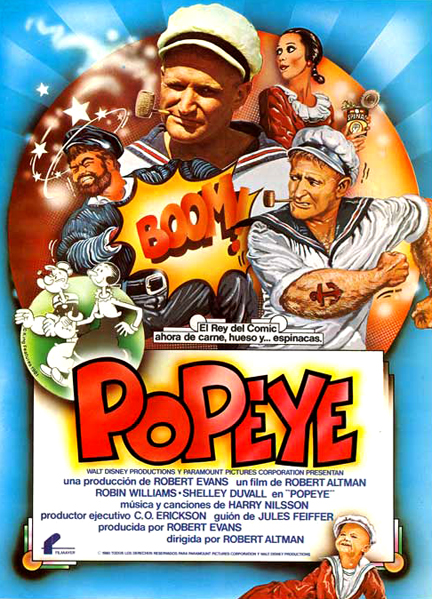 -
For just once a movie instead of an album.
Running Time: 113 minutes
Starring: Robin Williams, Shelley Duvall
Screenplay by: Harry Nilsson Music
Based on the comic strip by: E.C. Segar
Directed by: Robert Altman
-
The movie is not great, but "Popeye" probably isn't as bad as you have heard or remember it. The film is pretty loose in its design, and in some respects, it was probably meant to be that way since it sets up the whole Popeye character and how all these people come together in his life. I don't think audiences responded to the movie so well because it stays remarkably true to the original strip, something which many should appreciate and admire. It's a shame that was the film's downfall, though I bet many out there (the film does have plenty of fans believe it or not) give it the respect it deserves. But I bet the strip's more obscure characters and issues left audiences feeling alienated - keep in mind that this isn't a modern retelling or reimaging of who Popeye is or what he stands for. The film just wasn't - and still isn't - what people were expecting. The reason why I put it here? Harry Nilsson wrote the music and lyrics.
-
Also take a look at http://www.popeyemalta.com/ 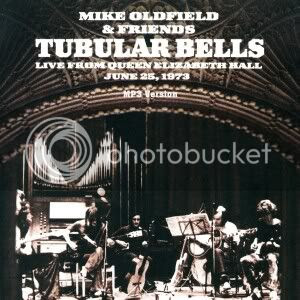 Mike Oldfield And FriendsTubular Bells Live
Live at Queen Elizabeth Hall, London, UK, June 25, 1973.
-
Lineup: Mike Oldfield, Kevin Ayers, Mick Taylor, Steve Hillage, Fred Firth, David Bedford, Pierre Moelin, Ted Speight and narration by Viv Stanshall.
Until he started touring regularly in the late 1970s, Mike Oldfield built up a reputation for reclusiveness that verged on hermit-hood - rarely interviewed, seldom seen, he simply sat in the studio, constructing his latest one man masterpiece, and apparently turning down some fabulous offers to go on the road. In fact, given the extraordinary complexity of the three albums he recorded during this period (Tubular Bells, Hergest Ridge and Ommadawn), his reluctance to perform live was scarcely surprising. If the Beatles didn't think it possible to recreate some of their stuff on stage, what hope did Kevin Ayers' old bassist have?
Just twice did Oldfield stir, once for a BBC TV performance of side one of Tubular Bells, and once for a full-fledged live presentation of the entire disc, shortly after the album's release in June 1973. Surrounding himself with friends - Ayers, David Bedford, Mick Taylor, Steve Hillage, Fred Frith, Pierre Moelin and Ted Speight (Steve Winwood dropped out after missing rehearsals), Oldfield then took over London's Queen Elizabeth Hall for a show that highlights both the strengths and the weaknesses of Tubular Bells.
The strengths are in the so-called main themes, the series of disparate melodies that give the piece its body. But the links that thread them together on vinyl are treated somewhat less forgivingly on stage. Side two of the album certainly drags, with the musicians apparently abandoning any hope of capturing its intricacies, and drowning instead in a self-inflicted sea of noodles.
The less than pristine sound quality exacerbates this problem, more so than it might on a "conventional" live performance - of course Tubular Bells was only ever conceived as a studio experience, and flaws that one might forgive on, say, a Stones live recording are amplified here to deafening proportions. At the end of the show, said one review, "the entire audience rose to its feet and hollered for more. It was one of those rare spontaneous outbursts of appreciation." Oldfield, on the other hand, swore never to play another show again.
Click on the highlighted tracks to download the MP3s (these are high quality, stereo MP3s - sample rate of 192 kibit/s). This recording has been in the hands of collectors for a long time and is likely from a soundboard source. VG+ to Ex- stereo. Never released before.