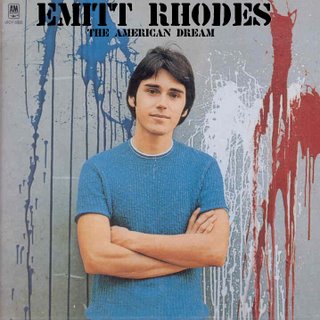 Billboard magazine called him "one of the finest artists on the music scene today" in 1971 and in 1996 referred to his debutalbum as one of the "best albums of the decade".

The American Dream is released in 1971 and is considered his third album. It is, in fact, his first. All recordings were made in 1967-1968. He recorded some of them with his previous band the Merry Go Round and some solo. The influence of Paul McCartney (Mother Earth / Someone Died) and Harry Nilsson (The Man He Was / In The Days Of The Old) can definitely be felt here. If you want to know what kind of music the beatles would have made if Harry was one of them you should listen to Holly Park. He doesn't copy them but there's a big resemblance.

If you are familliar with 10cc than "Mary Will You Take My Hand" will sound familiar.

Would it be possible to get a repost of this album? (When you get the opportunity)

Thank you, and Season Greetings.
Bob

Thanks so much for the repost (and, for all the Emitt Rhodes).

Seasons Greetings to you.
Bob

Hmm, extracting the ACE format file requires first installing a program that puts AdWare on your computer, unless one has access to Linux/MAC. Is there a Windows program that will extract ACE files which is minus such evilness?

I don't know wich program you use to unpack the files but WinAce, wich can be found on the right side of my blog, does not contain any adware. If you don't like the shareware version I advise you to read very carefully the licence text what comes with it.

The reason that I use Ace files is simply that they stay live much longer then rar or zip files.