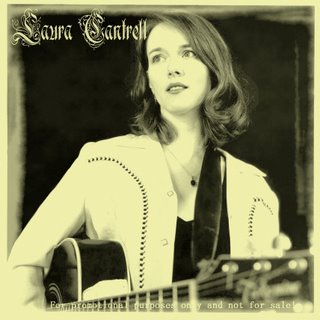 She resembles a bit early Nanci Griffith and her voice is at times like Lucinda Williams. She sings relaxed like she's sitting right beside you and seems really to enjoy herself. You can't quite classify Cantrell's music or vocal style but it's sure a departure from the overproduced all-sound-alike stuff on the radio. I hope she becomes a big commercial success but in the same time let's hope Nashville keeps its hands off her sound. One Shania is more than enough.

01 14th Street
First song on "Humming By The Flowered Vine," written by Emily Spray.
02 Bees
Co-written by Laura with Jay Sherman-Godfrey, this song is dedicated to the late Zeke Manners and inspired the title for "Humming By The Flowered Vine."
03 Hammer & Nails
Written by Dave Schramm and produced by JD Foster, this "Humming by the Flowered Vine" out-take features Joey Burns, John Convertino and Paul Niehaus from Calexico.
04 Nightclothes & Headphones
A collaboration with electronica artist Jason Forrest from his album "Shamelessly Exciting," in memory of the late John Peel.
05 I'll Remember You
Laura is supported by Mark Spencer, Jimmy Ryan and Jeremy Chatzky on this sentimental favorite from Hawaiian songwriter Kui Lee, recorded for BBC Radio 1 "OneMusic" on June 2, 2005.
06 Letters
Recorded live @ McCabe's Guitar Shop in Santa Monica, CA, this acoustic version of the Lucinda Williams song features Mark Spencer on guitar, Jimmy Ryan on mandolin and Jeremy Chatzky on bass.
07 I Lost You (But I Found Country Music)
A duet with Gordon McIntire of the Scottish band Ballboy, performed live on John Peel's annual Christmas broadcast on BBC Radio 1, December 23, 2003.
08 Rain Boy
A cover of obscure Memphis honky tonker Bruce Brakefield, broadcast live from Peel Acres on BBC Radio 1 in May, 2003.
09 When The Roses Bloom Again
The title track of the second album is an outtake from the Billy Bragg & Wilco album "Mermaid Avenue." Originally thought to be written by Woody Guthrie, the lyric has been traced back to an early 20th century Tin Pan Alley composition.
10 All The Same To You
From "When The Roses Bloom Again," written by Joe Flood.
11 High On A Hilltop
Laura covers a Tommy Collins classic. Studio outtake from "When the Roses Bloom Again."
12 Conqueror's Song
Laura & The Schramms recorded live at Off Broadway in St. Louis, written by Dave Schramm.
13 Indoor Fireworks
An underrated Elvis Costello gem from his "King of America" album, recorded for World Cafe at the Sirius studios in NYC.
14 Hong Kong Blues
The Hoagy Carmichael standard recorded at BBC's Maida Vale studios in London for a 2002 Peel Session.
15 Not The Tremblin' Kind
The title track to the debut album, written by George Usher.
16 Churches Off The Interstate
From "Not The Tremblin' Kind," written by Laura Cantrell.
17 Cellar Door
From "The Hello Recordings," produced by John Flansburgh of They Might Be Giants.
18 Poor Side Of Town
Johnny Rivers hit recorded for World Cafe (but never broadcast).
19 Legend In My Time
Don Gibson classic broadcast live from John Peel's home on BBC Radio 1 in February, 2001.
20 Two Seconds
From the 2001 "Not the Tremblin' Kind" album
21 Do You Ever Think Of Me
Another track From the "Not the Tremblin' Kind" album

Thanks so much for assembling all of these in one place [or at least one easy download]. I've just started to explore this wonderful and underrated singer/songwriter.

Dear n8w8...any chance you could re-up the links for this little gem? Thanks in advance.