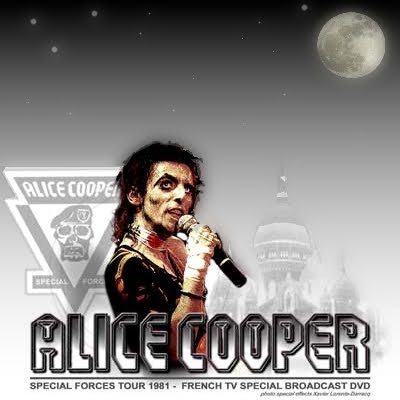 Resolution 640x480). Running Time 46'57. Size: 500 mb.
.
In 1981 Alice Cooper and his band shot a special in Paris for the french television. This show has never been aired outside France but has a few great moments. His clip for "Clones" is hilarious and the live version of "Eighteen" is imo the best he ever recorded.  His make-up during the special forces tour was scarier then ever before or after.

The show is a promo event with tracks from "Flush The Fashion" and "Special Forces" albums plus some vintage tunes from his golden days. The show was recorded in Paris in December 1981 just before the launching of the "Special Forces" european tour. The first part of the broadcast was filmed in several typical and touristic places of Paris : le Sacré-Coeur church, la Rue Saint-Denis, Pigalle, and the Centre Beaubourg. Most of the songs seen here remain officially unreleased to this day.

The link's already deleted by Rapidshare...

Press the downloadbutton again. It should be working now.