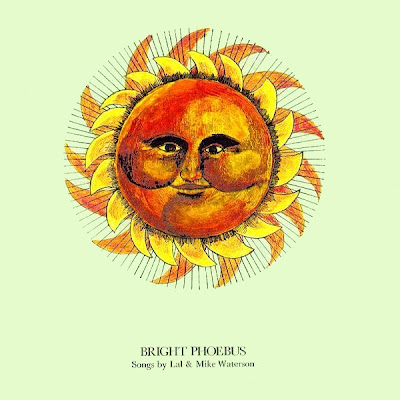 ©1972 Leading Note/Bee Bee Music
320 kbps Vinyl rip
.
In 1972, Mike and Lal Waterson (from the Watersons) joined forces to record an album for the Trailer label, Bright Phoebus, which is most unlike anything else they ever did, as it features self-penned songs (of which there are none on any of their other albums) as well as an all-star backing band. Joining Mike and Lal are folk-fusion luminaries such as Ashley Hutchings, Maddy Prior and Tim Hart of Steeleye Span, Richard Thompson, and Dave Mattacks of Fairport Convention, as well as traditionalist Martin Carthy. The album has remained out of print since 1985.
01 - Rubber Band / 02 - The Scarecrow / 03 - Fine Horsemen / 04 - Winifer Odd / 05 - Danny Rose / 06 - Child Among The Weeds / 07 - The Magical Man / 08 - Never the Same / 09 - To Make You Stay / 10 - Shady Lady / 11 - Red Wine And Promises / 12 - Bright Phoebus)

Amazing album, one of my favourites. There's so much diversity of music on the record, its a crime that its so obscure.

Its great to be able to get a decent bit rate version as well. Thank you so much for this

Stunning record and SHAME it is not on CD!

@William Jackson.
It is a shame but with todays music distribution devolepments it's highly unlikely that there will ever be a CD release.

There was(maybe still is) an English CD release of this on Leader. There was also a Japanese edition on CD at one point.

Many of the tracks from Bright Phoebus featuring Lal's singing appear on a compilation called "Never The Same
Leave-Taking From The British Folk Revival, 1970-1977" on
HONEST JON'S RECORDS, which also features Nic Jones and Dick Gaughan.